The goal of this research is to gather information on a ‘natural’ population, that of the Amboseli elephants. Then using the following data to help understand and preserve the intelligent and endangered elephants specials. Almost all knowledge of African elephants is known only thanks to this study.

The data used to create this visualization comes from Amboseli Trust for Elephants, a conservation group for African elephants. Since 1972, the Trust has been studying the elephants of the Amboseli National Park. Thankfully, the Amboseli elephants have been safe from poaching, showing that the 68 tracked families display a healthy population of elephants.

Above is a video of the entire visualization timeline. 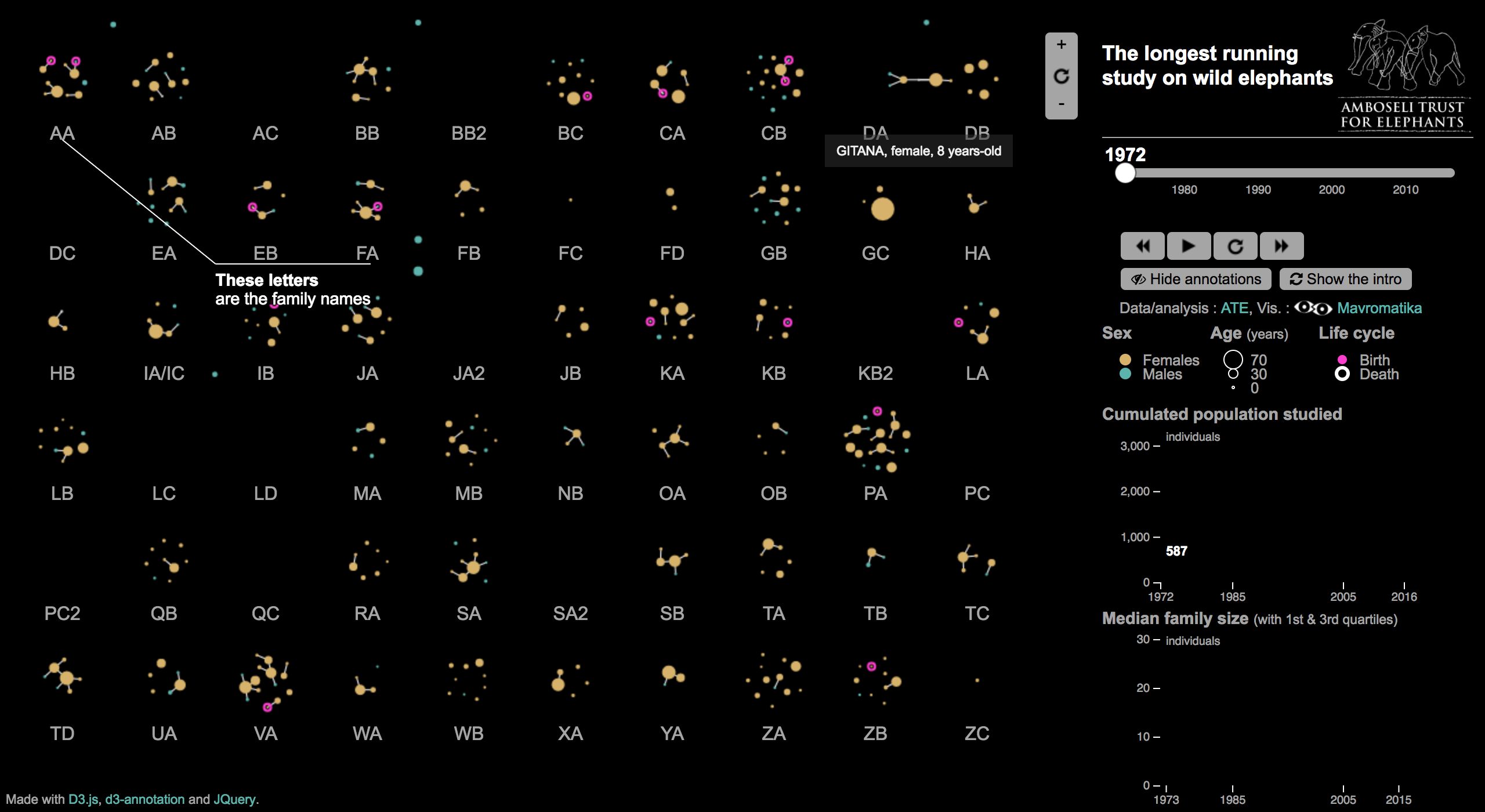 From first opening the visualization, users may be confused by the abstract nature of the visualization. After being hinted with the play button, users can begin the demonstration. Clicking the play button begins the timeline and different aspects are explained in each yeared frame. For example above, the user is shown that the clusters represent family names. Being curious enough, the user can hover over the circles to be told the name and age of the elephant. 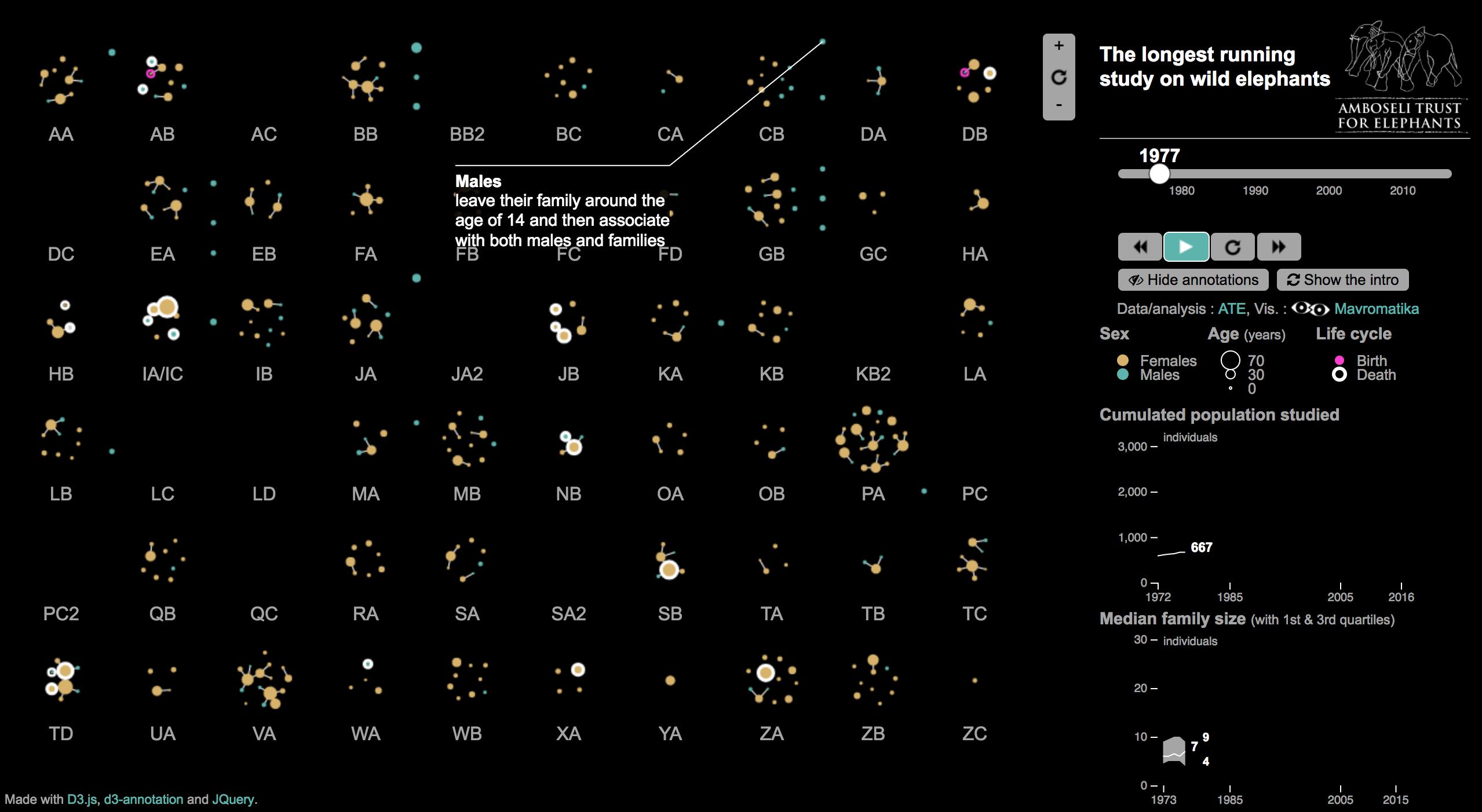 Based off of the structured flow of the visualization, the main users are those who are trying to be exposed to the plight of the elephants. A user who may not know anything about elephants or visualizations can follow along the timeline at his/her own pace, being able to pause at any time. The user has questions answered along the way during the timeline. The Amboseli Trust of Elephants constructed this visualization to shed light on the importance of the size of elephant populations, while showing the improvements possible over a 40 year time span. 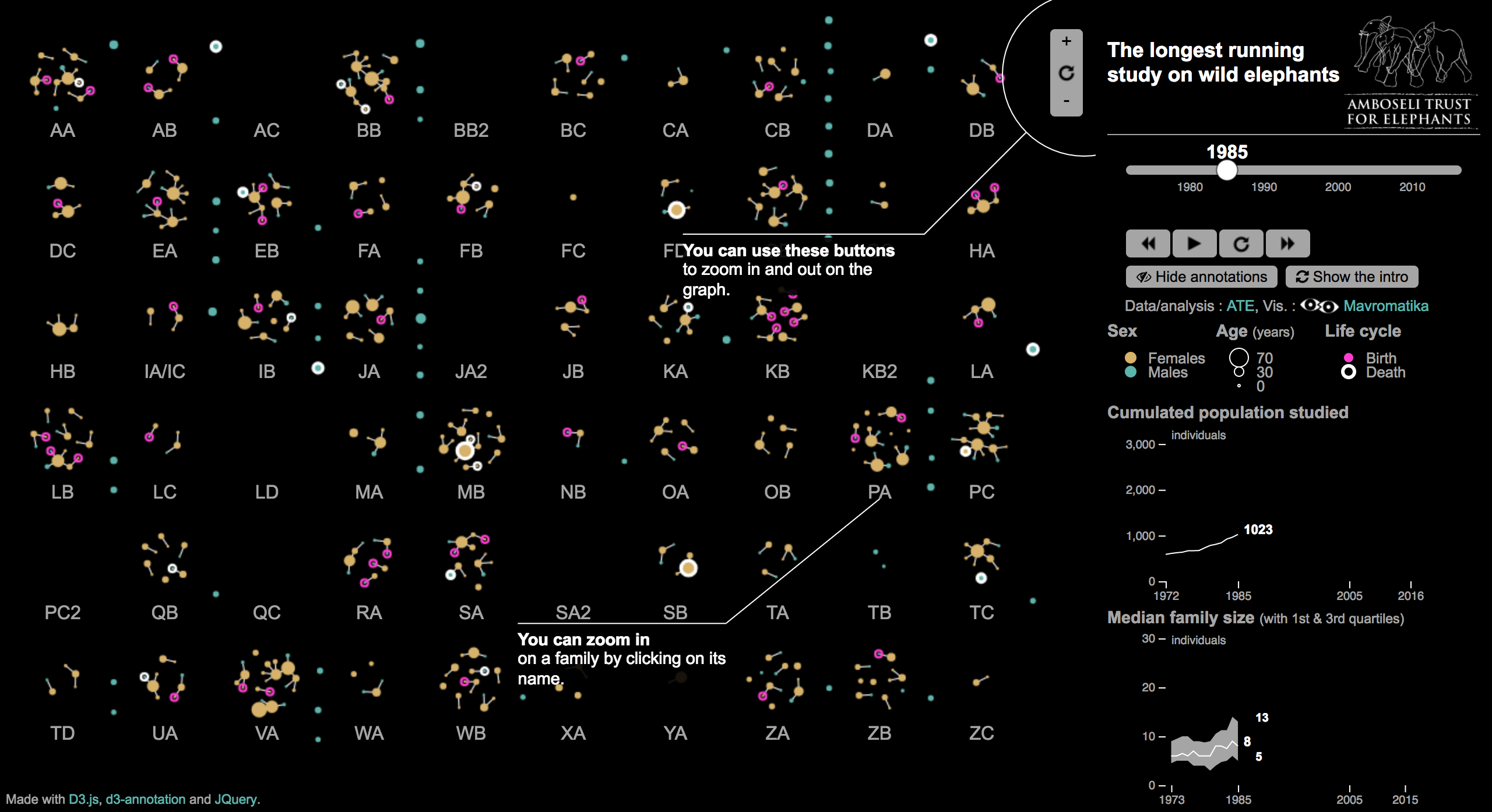 Asides from the timeline controls, most of the interactivity and subsequently the finer grain information is gathered from mousing over the elephant circles inside the families. Users are able to find age, name, and gender of elephants this way, as well as zooming in to get a finer look at the distribution of elephants. The three data points, age, name, and gender, are all encoded visually with cicle color, circle size, and circle family name groups. The consolidation allows users to see the general distribution of elephants without having to worry about useless information. Although, allowing users to still see this information at a smaller scale give the user an intimacy with the data of the elephants. Users will be invested in the data and the elephants, which is the purpose of the visualization, introducing other people to the elephants situation. 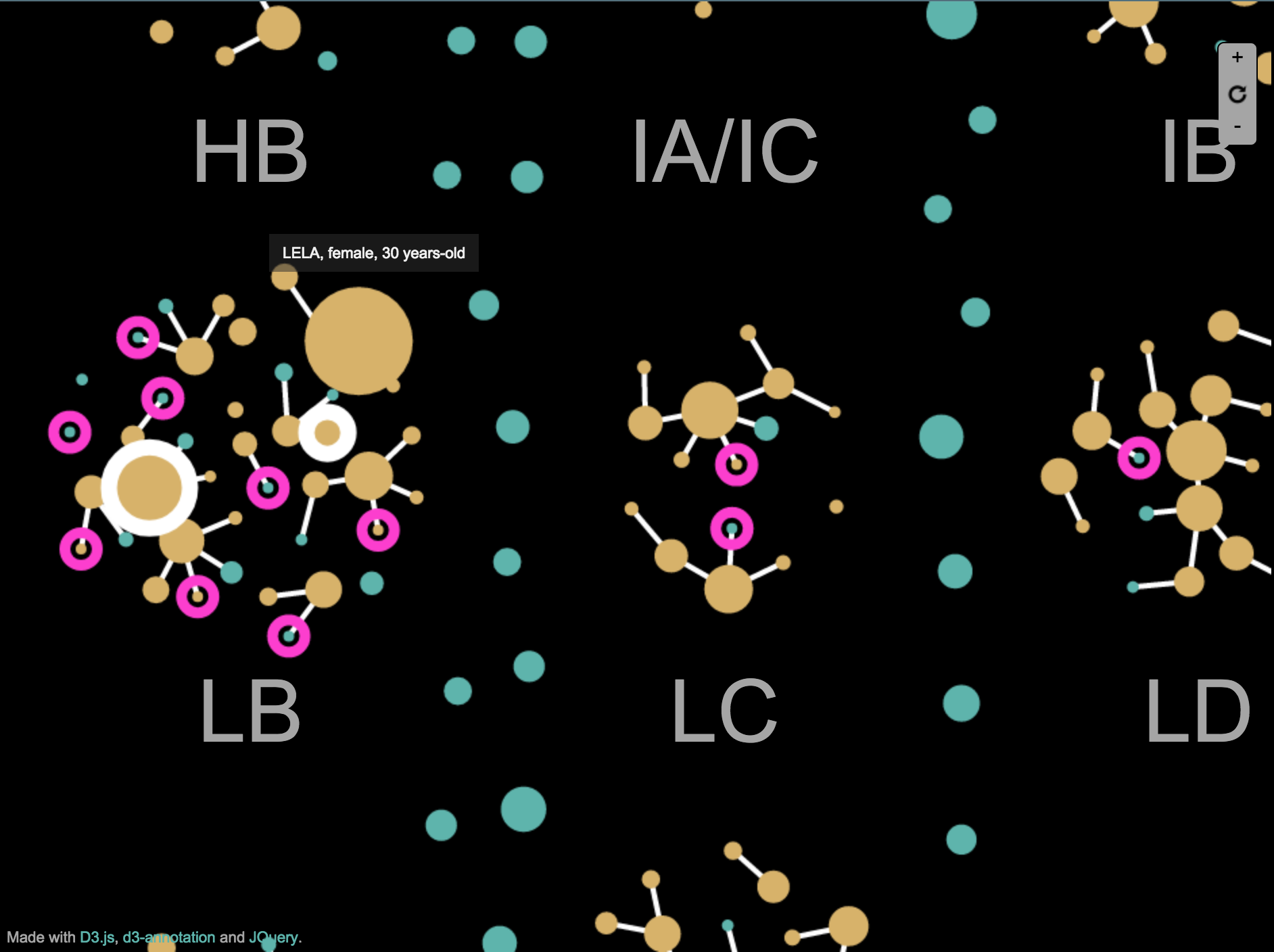 After zooming in, a few issues can be seen more easily. When hovering over an elephant's circle near the edge of the screen, the information will be run off screen, making it impossible to gather certain elephants' names or ages. It may seem like a minor issue, but the point of the visualization is to change people feelings towards elephants. The intimacy of names, ages, births, and deaths help users get involved. A minor bug like this only detriments the visualizations purpose. 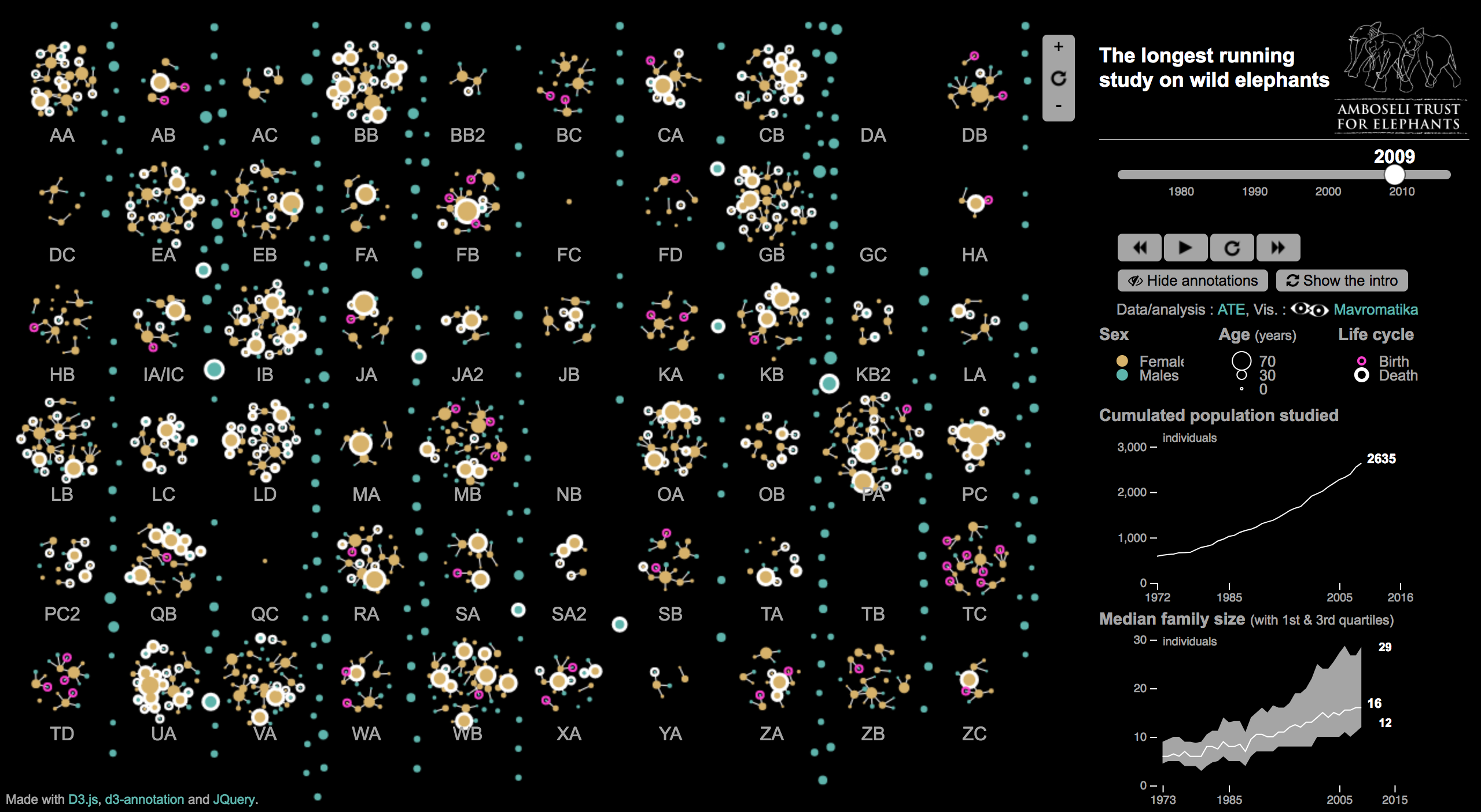 One of the biggest highlights of this visualization is the abstract linking of circles to elephants as well as the particular choice in color scheme. The dark base palette lets the colors pertinent to the elephats to pop from the screen. As well as choosing a color blind friendly palette. It allows users to easilty identify between elephant genders, and births and deaths. For example, the above year of 2009 had a significant number of elephant deaths. With this color palette, the user can easily tell that most of the deaths were female elephants, but elephants of all ages were affected. 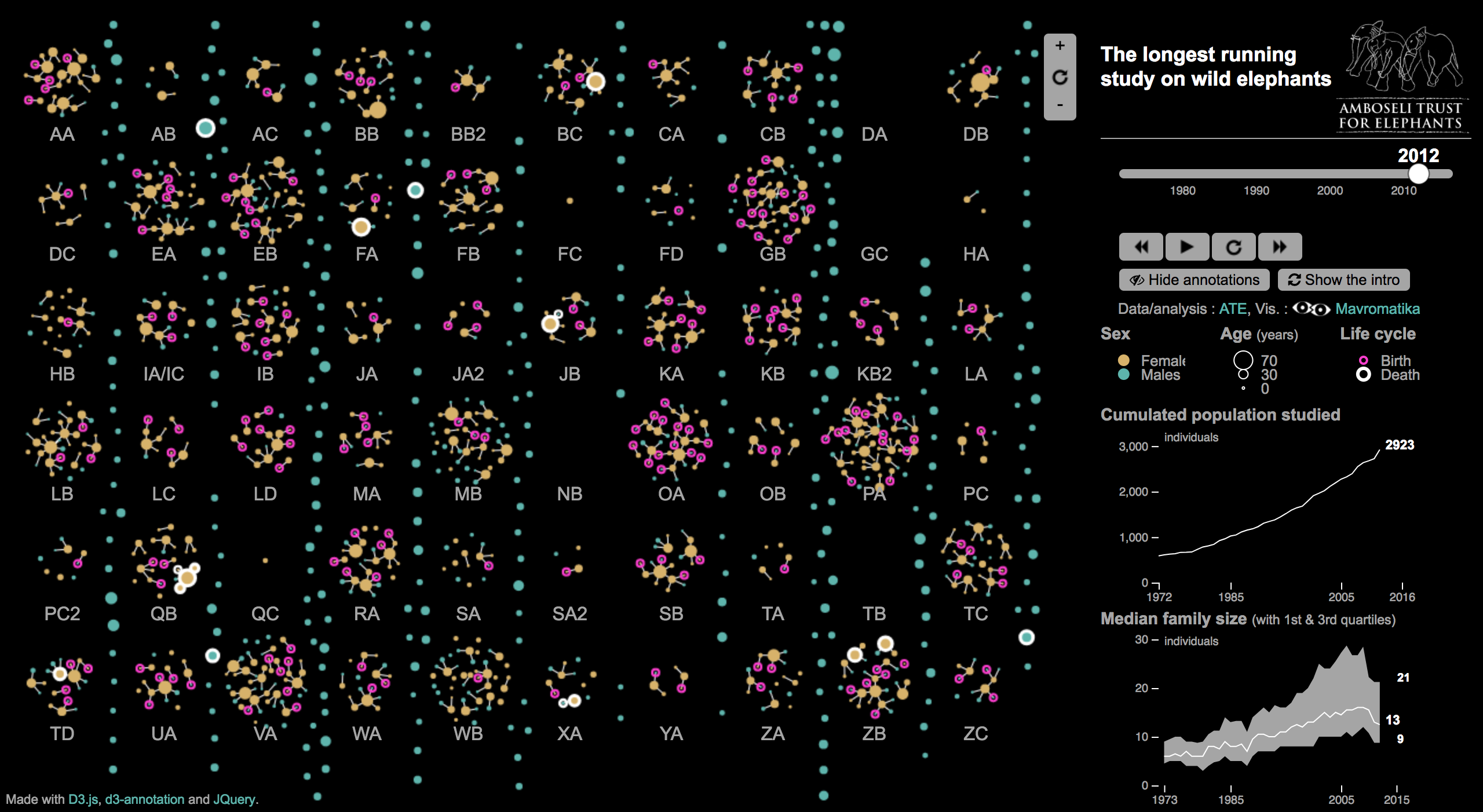 Following the year of 2009, 2012 had an absurb amount of elephant births. The rightly chosen pink for birthed elephants, makes it easy to see almost every family had multiple births. Then it allows the user to question if the deaths from 2009 are linked to the large number of births in 2012. Or are their other forces affecting the births and deaths of the elephants. 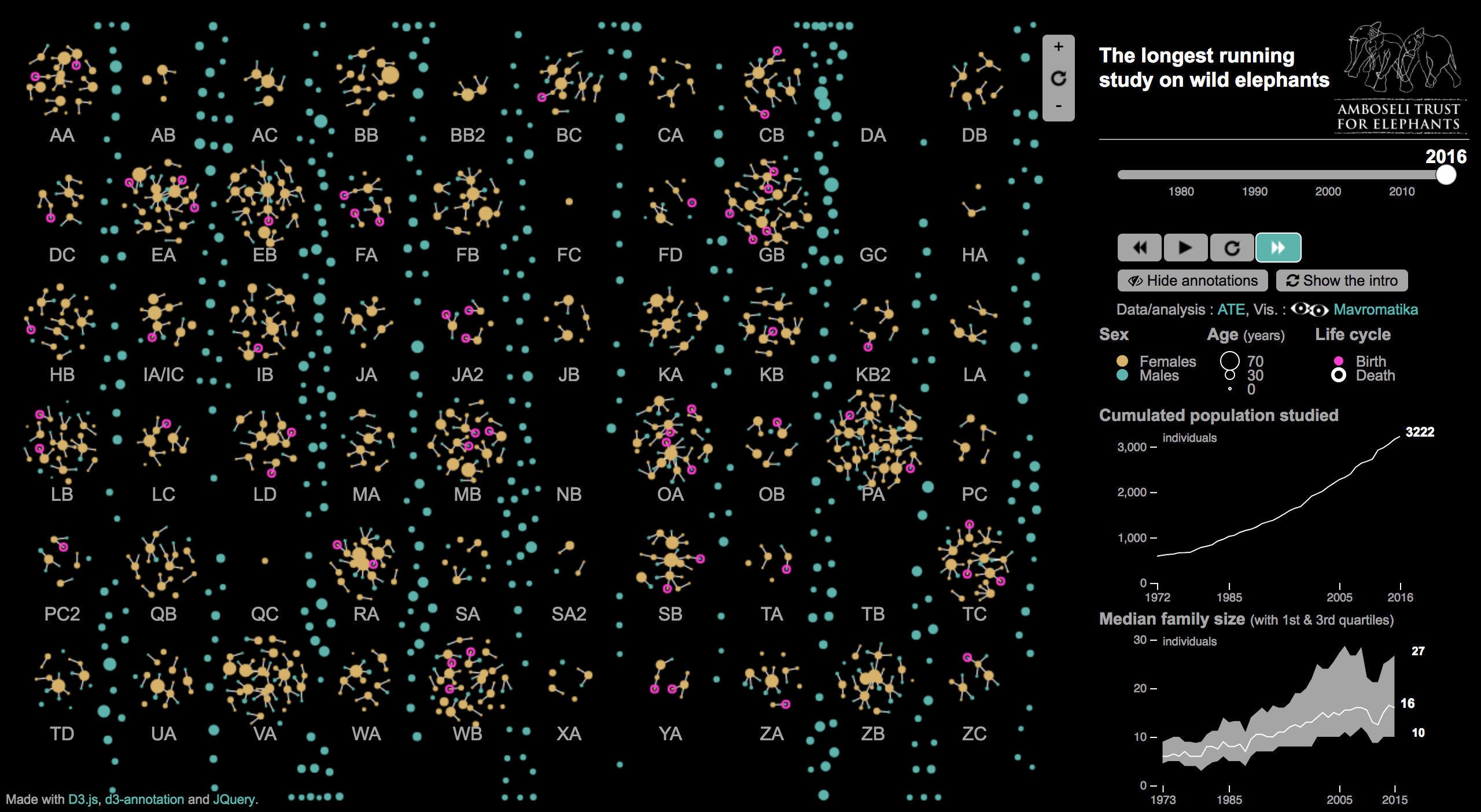 Above is another interesting trend that may be linked to the previous examples. Following the large number of deaths in 2009 and births in 2012, The last year of data, 2016, sees an extremely large number of rogue male elephants. Do these elephants happen because of the large population size in general, and that males leave the family at 14? Yet when compared to the first year, the ratio of males to females don't match. With the convenient organization of male elephants outside of the families, allow users to ask these kinds of relational gender questions.

The legend is simple yet informative. Births and deaths, age, and gender are always shown so users can always recall. The timeline controls are consolidated in the same location. As the timeline plays, the two population graphs are constructed as the timeline plays. Where the distribution of circles gives a humanistic view of the elephants, the graphs give an emperical view of the elephants situation. If a user is confused and lost in the vast number of varying circles, the graphs display the improving situation of the elephants. During times of poaching, a healthy elephant population is able to grow and survive.